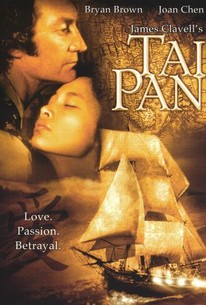 Daryl Duke directed this epic adventure, based on James Clavell's best-selling novel, concerning the battle for control of the China trade in early 19th-century Hong Kong. The film takes place in 1842 on the China Coast, where the Chinese object to the British imperialist policy of buying opium from the Chinese and then selling it back to them at a higher price. As a result, British warships arrive to pound the recalcitrant Chinese into submission. The outcome of the assault is a treaty giving England the right to operate Hong Kong as a free-port. The problem is who will become the Tai-Pan, or British merchant ruler of Hong Kong? The battle lines for the position are drawn between two swashbucklers -- Dirk Struan (Bryan Brown), a skipping and jumping buccaneer, and Tyler Brock (John Stanton), a weaselly cheat. Brock makes the first move by forcing Straun into bankruptcy, but, thanks to the help of the local prostitute May-May (Joan Chen), who has a score to settle with Brock, Straun is able to raise the money at the last minute. This enrages Brock, who remains bitter through the years and finally confronts Straun in a climactic sword fight.

There are no featured audience reviews for Tai-Pan at this time.