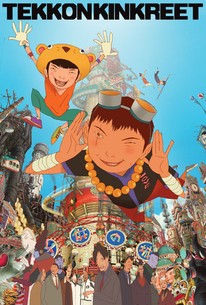 A pair of feisty young street urchins attempts to protect an unnamed metropolis from a diabolical villain whose plans to raze the urban landscape on the behalf of malevolent real-estate developers threatens to destroy the very soul of the city. Street-smart youngsters Black and White do their best to defend their territory from rival gangs as local yakuza leader Suzuki, fearing that the town has lost its zeal, plots a triumphant return to form. A lifelong criminal with a serious zodiac fixation, Suzuki (aqua The Rat) doesn't want to corrupt the city as much as he simply wants reinvigorate it with the kind of vibrancy that drew him to love it in the first place. Mr. Snake, on the other hand, wants nothing more than to profit as the buildings of the city crumble to make room for the massive amusement park planned by his wealthy clients. The only problem now is that Mr. Snake can't carry out his destructive deed while Black and White are still wandering the streets - of course that's nothing that can't be solved by a pair of sharp-shooting intergalactic assassins whose bullets always meet their mark. A metaphysical tale of survival in a city that seems to be poised on the brink of disaster, Tekkonkinkreet marks the feature directorial debut of longtime visual effects artist Michael Arias (The Abyss, Princess Mononoke). ~ Jason Buchanan, Rovi