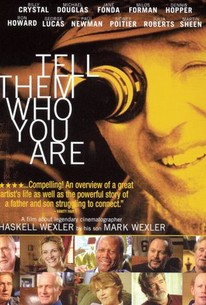 Tell Them Who You Are

The dysfunctional interaction between director and subject is fascinating, poignant, and revealing of both men and of father-son relationships in general.

Tell Them Who You Are Ratings & Reviews Explanation

Tell Them Who You Are Photos

Mark Wexler is a successful photojournalist who has also distinguished himself as a documentary filmmaker, but in many ways he has spent much of his life in the shadow of his more famous father, Haskell Wexler. One of Hollywood's greatest cinematographers, Haskell is also known as a director (he made the acclaimed feature Medium Cool as well as a handful of documentaries) and as a tireless political activist. But while Haskell is widely respected as a major talent, he's also known for being fiercely opinionated and difficult to work with, and Mark makes no secret of the fact that he's had a prickly relationship with his dad. Mark Wexler takes a detailed look at the life and work of Haskell Wexler in Tell Them Who You Are, which examines Haskell's career in the movie business, his relationship with his family (including his three marriages and his frequent lack of respect for Mark), and how he's viewed by his friends and peers. Interview subjects include Jane Fonda, Paul Newman, George Lucas, Michael Douglas, Milos Forman, Ron Howard, Dennis Hopper, and many more.

Critic Reviews for Tell Them Who You Are

Audience Reviews for Tell Them Who You Are

Tell Them Who You Are Quotes