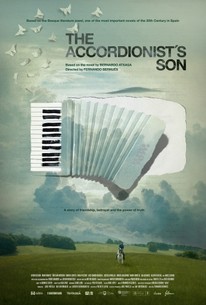 During the last years of General Franco's reign and after a short period fighting with ETA, which led to exile and prison, David is forced to emigrate from the Basque Country to California. In the United States, he finally finds the peace he had never been able to enjoy in his mother land and even finds some semblance of happiness in his new, normal life. But a few months ago, David was diagnosed with a serious illness and as a result, decided to write a memoir of his childhood in the village of Obaba. David has just finished "The Accordionist's Son", right before he is to undergo a life-or-death operation. Joseba, his old friend, has traveled from Obaba to be with him during this difficult time. They haven't seen each other for more than twenty years and Joseba knows that now, in what could be their last moments together, is the time to reveal the secret he's been hiding all these years. Now that the truth, which changes everything he thought he remembered about his old life, is out in the open, David will lose his naive idea of eternal friendship, but will finally be able to put to bed the ghosts of his tumultuous past and make peace with himself.

There are no featured audience reviews for The Accordionist's Son (El hijo del acordeonista) at this time.