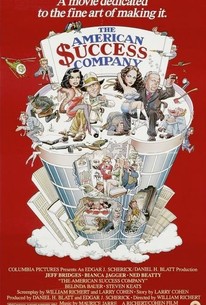 In mid-1978, the cult fantasy guru and comic book illustrator Bill Richert -- after months directing Jeff Bridges and Belinda Bauer in the scattergun carnival of a political satire, Winter Kills -- faced a real head-scratcher. With Winter yet to be completed, Richert's backer, Avco-Embassy, lopped off all funding and suspended production indefinitely. Projectless, Richert spun around, picked up an unproduced feature script by drive-in director Larry Cohen (Q, It's Alive!), and somehow found the cash to churn out a second piece of eccentricity with Bridges and Bauer in the leads, this one for Columbia Pictures -- hoping he could use the latter's earnings to polish off Winter. Thus began a very shaky history over the next 30 years for a little film originally called The American Success Company. This ghost of a picture bombed at the box office in 1979, was later reedited twice by Richert under distinct titles (first as American Success in 1981 and then as Success in 1983), and received limited theatrical distribution. It has since fallen through the cracks of movie history, never receiving official distribution on home video but popping up in bootleg versions under the titles Good as Gold and The Ringer. The movie tells the story of Harry Flowers (Bridges), a Milquetoast employee of a Munich-based credit card company, AmSucCo (did AmEx raise any eyebrows at that?), married to the daughter (Bauer) of his tyrannical boss (Ned Beatty). Flowers allows himself to be shoved around and coddled by everyone, until he suddenly decides to slip into an assumed identity -- that of a gruff, bull-by-the-horns modern-day prince, determined to "rescue himself" from wimpdom by learning sexual aggression from a prostitute (Bianca Jagger) and ultimately wresting millions from the hand that feeds him.

Shelagh McLeod
as Girl at Party

There are no critic reviews yet for The American Success Company. Keep checking Rotten Tomatoes for updates!

There are no featured audience reviews for The American Success Company at this time.