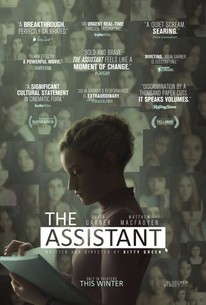 Led by a powerhouse performance from Julia Garner, The Assistant offers a withering critique of workplace harassment and systemic oppression.

The movie doesn't seem to be playing near you.

Go back
Enter your location to see showtimes near you.
View All Theaters & Showtimes

"The Assistant" follows one day in the life of Jane (Julia Garner), a recent college graduate and aspiring film producer, who has recently landed her dream job as a junior assistant to a powerful entertainment mogul. Her day is much like any other assistant's -- making coffee, changing the paper in the copy machine, ordering lunch, arranging travel, taking phone messages, onboarding a new hire. But as Jane follows her daily routine, she, and we, grow increasingly aware of the abuse that insidiously colors every aspect of her work day, an accumulation of degradations against which Jane decides to take a stand, only to discover the true depth of the system into which she has entered.

News & Interviews for The Assistant

The Rhythm Section Hits Too Many Familiar Beats
The Indie Fresh List: A Pair of Cultural Icons and a Conscientious Objector
View All

Critic Reviews for The Assistant

Audience Reviews for The Assistant