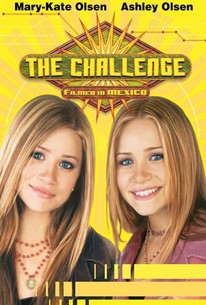 Two girls have an unexpected (and unwelcome) reunion with several millions of people watching in this blend of comedy and adventure. Shane (Mary-Kate Olsen) and Lizzie (Ashley Olsen) are teenage twin sisters whose parents divorced when they were young, with each girl living with one of their parents. With time, Shane and Lizzie have developed strongly differing personalities -- Shane is a neo-hippie with bohemian leanings and a fascination with nature, while Lizzie is a high-strung and firmly regimented yuppie in training. Unknown to one another, both girls have applied to take part in a popular television reality series, "The Challenge," in which young people compete for college scholarships by taking part in a series of physical and psychological tests on a remote tropical island. Sensing a possible ratings boost, the show's producers choose both of the battling siblings to appear on the show, but after a few on-camera squabbles, Shane and Lizzie realize they'll have to cooperate if they want to win the contest. The Challenge was the last in a series of successful direct-to-video features starring the Olsen sisters before they made a much-publicized return to the big screen with New York Minute.

Jeannette Weegar
as Sasha
View All

Critic Reviews for The Challenge

Audience Reviews for The Challenge

There are no featured audience reviews for The Challenge at this time.