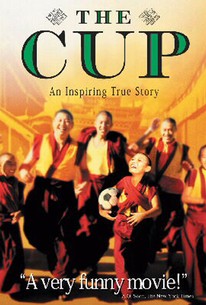 A group of Tibetan monks finds themselves torn between spiritual enlightenment and their love for soccer in the comedy Phorpa/The Cup. In Northern India near the Himalayas, a band of Buddhist monks from Tibet have set up a monastery in exile from their native land. Under the gaze of their leaders -- firm-handed Geko and the Khempo, a more easy-going sort -- new students are instructed in Buddhist practices as the monks educate young children, who are usually fidgety and prefer to discuss football rather than spiritual matters. Two of the novice monks, Lodo and Orgyens, are also avid soccer fans, and they eventually find themselves punished for watching a match on television without permission. However, the tiny wave of soccermania sparked by the new arrivals begins to grow, and when the young monks ask permission to watch the upcoming World Cup Final between France and Brazil, Geko and the Khempo say yes. However, now the monks have to figure out how to pay for the satellite dish they'll need to pull in the broadcast. First-time director Khyentse Norbu was himself a Buddhist monk, lending an authenticity to the proceedings. Phorpa/The Cup was shown as part of the Directors Fortnight series at the 1999 Cannes Film Festival.

Orgyen Tsering
as Football Can Monk

Tupten Loday
as Lights Out Monk

Drakpa Tenzin
as Lights Out Monk

Gaday Tsering
as Lights Out Monk

Critic Reviews for The Cup

Audience Reviews for The Cup

There are no featured audience reviews for The Cup at this time.