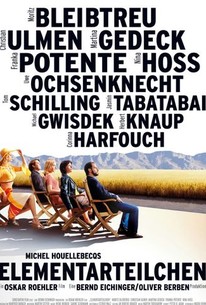 With his bittersweet, German-language tragicomedy The Elementary Particles, writer-director Oskar Roehler brings to the screen Michel Houellebecq's popular seriocomic novel of two ill-adjusted siblings. Christian Ullmen and Moritz Bleibtreu portray, respectively, Michael and Bruno, half brothers who have each adjusted poorly to adult life, thanks in no small part to a cracked upbringing by their eccentric, social dropout mother. As the story opens, each brother experiences a personal crisis. Geneticist Michael returns to his work in cloning after an extended period away from his Irish laboratory, but suffers in quiet desperation from his intense inner loneliness; he must soon leave the lab once again and head back to his hometown, where his grandmother's corpse is being disinterred from a cemetery. Upon arrival, he reencounters Annabelle (Franka Potente of Run Lola Run), an adolescent crush to whom he was never before able to express his romantic yearnings; they consummate an intense erotic affair, and remain together, but a troubled pregnancy renders her infertile and makes family conception an utter impossibility. Meanwhile, high school teacher Bruno (a married husband and father) is driven completely around the bend by sexual yearnings for his female students, and consequently suffers from a nervous breakdown; he checks himself into a sanitarium, then heads off on a bender at a swingers' retreat with a new lover, Christiane (Martina Gedeck) - but their pleasure is all too short-lived. Nina Hoss and Uwe Ochsenknecht co-star.

Critic Reviews for The Elementary Particles

Audience Reviews for The Elementary Particles