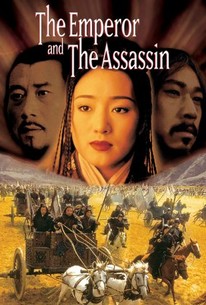 The Emperor and the Assassin (Jing Ke ci Qin Wang)

A lavishly produced historical drama from China, Jing Ke Ci Qin Wang/The Emperor and the Assassin tells the complex, multi-facetted story of the man who became the first Emperor of a unified China, another man who has sworn to kill him, and a woman who is loved by both men. Late in the Third Century B.C., when China was comprised of seven rival kingdoms, Ying Zheng (Li Xuejian) was the leader of Qin. Ying Zheng had a dream in which he joined together the seven kingdoms into a single utopian state, and taking this as a mandate from God, he invaded the nearby state of Han as the first step toward this goal. However, not everyone in the neighboring states was happy with Ying Zheng's crusade, which seemed to indicate a lengthy war with many casualties. Lady Zhao (Gong Li), Ying's lover, devised a scheme to help Ying Zheng take over the nearby and uncooperative state of Yan; she fabricated a fake assassination plot against him, and framed the leader of Yan, once Ying Zheng's childhood friend, as the man behind the murderous plot. However, Lady Zhao did not choose the would-be assassin wisely; while Jing Ke (Zhang Fengyi) loved her and was willing to do her bidding, Jing Ke's previous assassination assignment caused the unintended death of an innocent blind girl, which left him full of regret and a bit unstable. When Jing Ke learned a closely guarded secret about Ying Zheng's past, he became blindly determined to kill the would-be emperor, whatever the cost. Produced on a lavish budget by Chinese standards ($15 million), Jing Ke Ci Qin Wang/The Emperor and the Assassin was directed by Chen Kaige, best known to Western audiences for the international success Farewell My Concubine.

New on Netflix in February 2020
New Hulk Escaped from Prison?
A Pair of Big Movies Get the Gong
View All