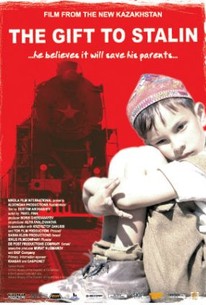 The Gift to Stalin

A child who has seen some of the best and worst of the world around him wants a great man to answer some questions in this period drama with deeply tragic overtones. In 1949, Sashka (Dalen Shintemirov) is an eight-year-old Jewish boy from Kazakhstan. Near the outset of the film he gets deported to the Kazakh steppes with his grandfather, with the old man dies, prayer book in hand - meaning that the chances of the boy being reunited with his missing parents are slim at best. En route, matters grow worse when Sashka falls ill, and gets accidentally dumped in with the bodies of his fellow passengers who didn't survive the voyage. His fate appears to be sealed, but at the last minute, he's quietly rescued by a one-eyed railroad switch worker, Kasym (Nurjuman Ikhtimbayev), who has been assigned to transport the bodies of the dead. Kasym takes the boy to a local shaman who restores the child's strength and renames him Sabyr (meaning "humble"); Kasym and Sabyr then move to a dusty village where the boy comes of age. As Sashka makes friends with wild-eyed local kids who live to play pranks on others, he sees a newspaper story about a nationwide contest to find the perfect birthday present for Joseph Stalin, and the boy wracks his brain to come up with the winning entry and get the special prize, a meeting with the Soviet leader. Pokarok Stalinu (aka The Gift To Stalin) was directed by Rustem Abdrashev, who also works under the name Rustem Abdrashitov.

Critic Reviews for The Gift to Stalin

Audience Reviews for The Gift to Stalin

There are no featured audience reviews for The Gift to Stalin at this time.

The Gift to Stalin Quotes