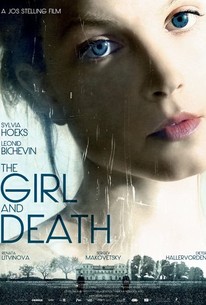 The Girl and Death

The Girl and Death Photos

In Russia of the post-WWII era, aging doctor Nicolai (Sergey Makovetsky - DUSKA) returns to an old, abandoned hotel outside of Liepzig, Germany, the place where he first met his great love 50 years ago, and relives his romantic tragedy. The hotel still bears the traces of its impressive past. As a young medical student travelling from Moscow en route to Paris, young Nicolai (Leonid Bichevin) meets and falls in love with the beautiful courtesan Elise (Sylvia Hoeks) at the hotel, which is also a brothel. Nicolai prolongs his stay, despite Elise's friend Nina's (Renata Litvinova - PASSIONS) discouragement. After a few days, it becomes obvious that their love is doomed, and he is forced to depart: Elise "belongs" to the old Count (Dieter Hallervorden - DIE DIDI SHOW), who also owns the hotel. Five years later upon Nicolai's return to the hotel on his was back to Moscow, the Count takes violent measures. Elise makes a choice for the young Nicolai and the Count stops his payments to her. Her debts mean Elise, who has also fallen ill, cannot leave the hotel with Nicolai. Elise asks Nicolai to leave alone, but he refuses. She then pretends to reverse her choice, and returns to the Count. Enraged, Nicolai leaves for Moscow. Some years later, a now wealthy Nicolai returns to the hotel to take revenge on his rival. Nicolai snubs Elise and returns for good to Moscow. Elise, desperately alone and ill, remains in the empty hotel, which is closed down following the Count's death. 50 years later, old Nicolai receives a visit at his office in Moscow from old Nina (Svetlana Svetlichnaya - THE DIAMOND ARM). She brings him a book of Pushkin poems containing a handwritten message for Nicolai from Elise. Nicolai decides to return to the hotel forever to relive the tragedy that embodies the end of an era and the vibrant hopes and life of both its young couple and of a new world. (c) Shadow

Ulrich Anschütz
as Bailiff
View All

News & Interviews for The Girl and Death

Critics Consensus: The Other Woman is Short On Laughs
View All

Critic Reviews for The Girl and Death

Audience Reviews for The Girl and Death

There are no featured audience reviews for The Girl and Death at this time.

The Girl and Death Quotes