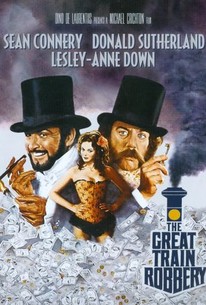 Not a remake of the landmark 1903 Edwin S. Porter film, The Great Train Robbery is a dramatization of the famous first hold-up of a moving train in 1855 England. The conspirators in this undertaking are Edward Pierce (Sean Connery), Agar (Donald Sutherland) and Clean Willy (Wayne Sleep). Pierce is the brains, Clean Willy the brawn, and safecracker Agar provides the finesse. The scheme involves stealing a shipment of gold bars intended to be used in the payroll for the Army in the Crimean War. Lesley Anne Down co-stars as Miriam, the woman on the outside who arranges Connery's getaway. When released in England, this film was titled The First Great Train Robbery, so as not to be confused with Britain's embarrassing 1963 railroad heist. Director Michael Crichton adapted the story from his own, more-clinical novel on the same subject. Filmed in Ireland, The Great Train Robbery was dedicated to the memory of its director of photography, Geoffrey Unsworth, who died shortly after the production wrapped. ~ Hal Erickson, Rovi

Lesley-Anne Down
as Miriam

Agnes Bernelle
as Woman on Platform

Jenny Till
as Woman on Strand

Craig Stokes
as Urchin on Strand

Hubert Rees
as Lewis
View All