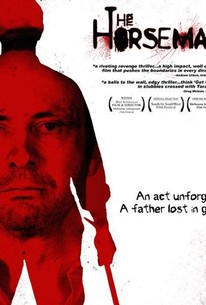 A seemingly ordinary man turns to violence in this independent thriller from Australia. Christian Forteski (Peter Marshall) is a businessman whose teenage daughter Jesse (Hannah Levien) has been living on the edge since her parents divorced. Jesse runs away from home, and several weeks later Christian's anxiety about his missing daughter turns into rage when he receives a video in the mail of Jesse being brutally raped. Normally level headed, Christian jumps into his car and sets out to find whoever is responsible for making the video, starting with the people who mailed it to him. While heading north to Queensland, Christian picks up Alice (Caroline Marohasy), a teenage hitchhiker who reminds him a bit of Jesse. Christian and Alice strike up a friendship, and she begins to see the older man as someone she can trust, without knowing that Christian was turned into a deranged killing machine, leaving a trail of victims as he drives across the country to avenge his daughter. The Horseman was the first feature film from writer and director Steven Kastrissios; it was expanded from a short film by Kastrissios which was a prizewinner at the 2006 Queensland New Filmmaker Awards. ~ Mark Deming, Rovi

Critic Reviews for The Horseman

Audience Reviews for The Horseman