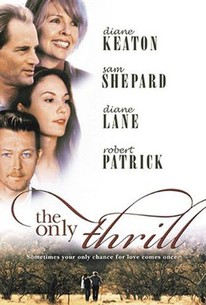 The Only Thrill Ratings & Reviews Explanation

In this drama about love and how it can go wrong, Reese McHenry (Sam Shepard) is the owner of a clothing store who, in 1966, hires Carol Fitzsimmons (Diane Keaton) to work for him as a seamstress. Carol is a widow, and Reese's wife is in a coma; both are lonely, and they begin a habit of going to the movies every Wednesday afternoon, and sometimes also meeting for furtive sexual assignations. But Reese is unable to commit to a more permanent relationship as long as his wife is alive, despite his feelings for Carol, and their love remains in a state of limbo for the next 30 years. Meanwhile, Reese's son Tom (Robert Patrick) and Carol's daughter Katherine (Diane Lane) become romantically involved with no knowledge of their parent's relationship, but Tom's unwillingness to commit mirrors his father's own failings. The Only Thrill was based on the play The Trading Post by Larry Ketron, who also wrote the screenplay.

Brandon Smith (I)
as Mike

Richard Nance
as Poker Player No. 1

Fred Ellis
as Poker Player No. 2

Jessica Looney
as Daughter
View All

Critic Reviews for The Only Thrill

Audience Reviews for The Only Thrill

The Only Thrill Quotes