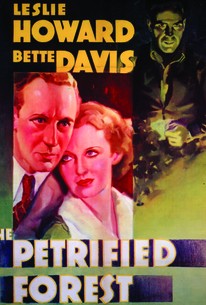 Burned-out British intellectual Alan Squier (Leslie Howard) wanders into the desert service station/restaurant owned by Jason Maple (Porter Hall). Alan finds himself an object of fascination for Jason's starry-eyed daughter, Gabrielle Bette Davis, who dreams of moving to France and establishing herself. Boze Hertzlinger (Dick Foran), Gabrielle's gas-jockey boyfriend, grows jealous of Alan, but the penniless, dissipated Briton has no intention of settling down; in fact, as soon as he mooches a ride from wealthy tourists Mr. and Mrs. Chisholm (Paul Harvey and Genevieve Tobin), he's on his way out of Gabrielle's life...or so everyone thinks. Later that same day, Alan, Gabrielle, Jason, Boze, and Mr. and Mrs. Chisholm are huddled together in the selfsame restaurant, held at gunpoint by Dillinger-like desperado Duke Mantee (Humphrey Bogart) and his gang. Alan seems indifferent to the danger, toasting Duke as "the last great apostle of rugged individualism." Sensing an opportunity to give his life meaning, Alan takes Duke aside, begging the outlaw to kill him so that Gabrielle can travel to Paris on the money provided by Alan's insurance policy. When the police converge on the restaurant, Duke announces that he intends to use Mr. and Mrs. Chisholm as a shield in order to make his escape. Alan tries to stop him, receiving a bullet in the belly for his troubles. "So long, pal," growls Duke fatalistically, moments before his own death, "I'll be seein' ya soon." Alan dies in Gabrielle's arms, secure in the knowledge that, alone among the film's principals, she will be able to escape the trap of her existence. When originally presented on Broadway, Robert E. Sherwood's The Petrified Forest starred Leslie Howard and Humphrey Bogart. Warner Bros. intended to cast Edward G. Robinson in Duke's role, only to be thwarted by Howard, who told the studio that he himself would drop out of the project if Bogart wasn't retained. The film proved to be just the break that Bogart needed; years later, he expressed his undying gratitude to Howard by naming his daughter Leslie Bogart. One year after The Petrified Forest, Humphrey Bogart and Leslie Howard co-starred in The Stand-In. ~ Hal Erickson, Rovi

John Alexander
as Joseph the Chauffeur

Critic Reviews for The Petrified Forest

Audience Reviews for The Petrified Forest