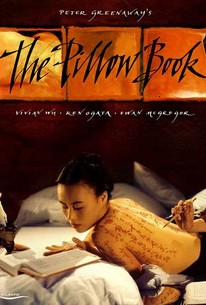 The Pillow Book is undeniably sensual and visually ravishing, but the film's narrative lacks the hypnotic pull of its imagery.

The erotic exploits of a Japanese woman with an obsession for body writing provides the basis of this exotic, intellectually challenging and lushly executed drama from one of Britain's most off-beat filmmakers Peter Greenaway. Beautiful Nagiko was born and raised in Kyoto to a professional calligrapher and struggling writer. For each birthday, her father would spend much time tenderly painting birthday wishes on Nagiko's face as she listened to her aunt read from classic Japanese 10th-century writer Sei Shonagon's Pillow Book. For Nagiko, this birthday ritual was indescribably tender and erotic, but when she turned 18, her father would no longer do it, instead insisting that she marry his homosexual publisher's nephew. It is an unhappy union, not helped by Nagiko's obsession to become a writer like Shonagon. One day her spouse finds her writings and destroys them. In anger she abandons him and moves to Hong Kong where she becomes a fashion model. There Nagiko begins making love to a calligraphers willing to write on her naked body. She moves from one to the other searching for the one who will finally satisfy her, but has no luck until she encounters Jerome, an Englishman, who asks her to write her stories upon his body. When she finishes, she takes the naked Jerome to her father's publisher who is aroused by the Englishman and eventually becomes his lover. Nagiko is devastated and her ensuing jealousy spawns only tragedy. The film features considerable, explicit female and male nudity.

Ken Ogata
as The Father

Yoshi Oida
as The Publisher

Hideko Yoshida
as The Aunt / The Maid

Judy Ongg
as The Mother

Ken Mitsuishi
as The Husband

Roger To Thanh Hien
as Calligrapher

Wichert Dromkert
as The Book of the Innocent

Martin Tukker
as The Book of the Idiot

Wu Wei
as The Book of Old Age

Tom Kane
as The Book of the Exhibitionist

Kheim Lam
as The Book of the Seducer

Daishi Hori
as The Book of Youth

Kinya Tsuruyama
as The Book of Secrets

Eiichi Tanaka
as The Book of the Betrayer

Rick Waney
as The Book of Silence

Masaru Matsuda
as The Book of Birth & Beginnings

Wataru Murofushi
as The Book of the Dead

Jim-Adhi Limas
as Man in Lift

Lu Jinhua
as Wife of Calligrapher

News & Interviews for The Pillow Book

Critic Reviews for The Pillow Book

Audience Reviews for The Pillow Book