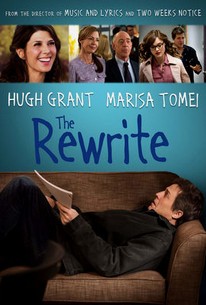 The Rewrite's unremarkable plot is enlivened considerably by its likable cast, adding up to a comedy that coasts capably on the charms of Hugh Grant and his co-stars.

Once upon a time, Keith Michaels (Hugh Grant - About a Boy, Love Actually) was an Award-winning Hollywood screenwriter, but divorce and a string of unsuccessful films have left him with nothing but bad debts and blank pages. So when his agent arranges a job as guest screenwriting professor at a remote university in upstate New York, a desperate Keith can't say no. Initially hoping to give minimal effort to actual teaching so he can focus on his next script, Keith unexpectedly finds himself becoming invested in his students lives, including Holly (Marisa Tomei, The Wrestler), a single mom looking to start her own new chapter. The Rewrite features an all-star cast, including J.K. Simmons (Whiplash), Allison Janney ("Mom"), Chris Elliott (Groundhog Day) and Bella Heathcote (Pride and Prejudice and Zombies). (C) RLJE/Image Entertainment

News & Interviews for The Rewrite

New on DVD & Blu-Ray: Interstellar, The Imitation Game, and Wild
View All

Critic Reviews for The Rewrite

Audience Reviews for The Rewrite