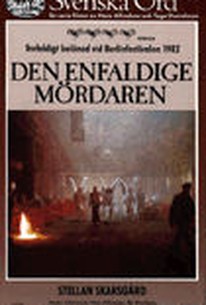 A young man (Stellan Skarsgård) with a harelip deformity has been called the "idiot" since he was little because of his difficulty in talking. When his mother dies, Hoglund (Hans Alfredson), a rich, despotic, Nazi landowner brings the boy to his farm and abuses him through overwork, feeds him food unfit for consumption, and forces him to sleep in the barn. Additional verbal humiliation is piled on top of these inhumane acts, until the boy finds some sympathy and assistance from a kind family nearby. They decide to take him in, and the young man does well enough to save his earnings and buy a motorcycle -- defeating Hoglund's attempt to prevent him from getting a license. While all this is going on, the young man and Anna (Maria Johansson), the kindly farmer's daughter who is confined to a wheelchair, fall in love with each other. But Hogland is determined to ruin the family and he manages to do so by paying off all the farmer's creditors and then expelling the family from their homestead. Pushed beyond his capacity to bend, the young man kills Hoglund and escapes with Anna. During this time, he has visions of three avenging angels who have appeared before whenever he was in trouble or when he was reading the Bible. It is the angels who encouraged him to kill Hoglund, and who stay with him afterwards. He and Anna escape in Hoglund's car, and they find a temporary shelter in a very old house. When Anna starts reading to him from the Bible, he falls asleep, and she looks out the window to see that people are coming to the house. She must make a decision on how to handle this new danger, and as she reaches for the pistol that had belonged to Hoglund, the decision is reached as well. ~ Eleanor Mannikka, Rovi

Stellan Skarsgard
as The Idiot

There are no critic reviews yet for The Simple-Minded Murder (Den Enfaldige mördaren). Keep checking Rotten Tomatoes for updates!

There are no featured audience reviews for The Simple-Minded Murder (Den Enfaldige mördaren) at this time.