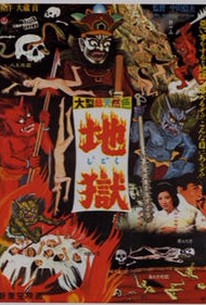 The Sinners of Hell (Jigoku)

The Sinners of Hell (Jigoku) Photos

When a young college student had his sadistic friend leave a respected yakuza to die after inadvertently running him down on a lonely stretch of road, their fate is sealed in director Nobuo Nakagawa's Japanese horror classic Jigoku. Shiro's life seems to be going well; he's in love with pretty Yukiko and just received her parent's permission to take her hand in marriage. When his roommate, Tamura, runs down a drunken yakuza and refuses Shiro's plea to return to the scene of the crime and help the man, Shiro's conscience burns, and he soon admits his crime to Yukiko. As the two rush to Yukiko's father for advice, their taxi crashes and Yukiko dies in Shiro's arms. Overwhelmed by the tragedy that surrounds him, Shiro's life descends into a haze of alcohol and loose women until he receives word that his mother is gravely ill. Though he makes it to the senior citizens community in time to see her before she dies, Shiro is followed to the community by both Tamura and Yoko, a prostitute out to avenge the death of her yakuza boss. As Shiro is sent screaming into hell, his horrifying journey into darkness has only begun. ~ Jason Buchanan, Rovi

Critic Reviews for The Sinners of Hell (Jigoku)

Audience Reviews for The Sinners of Hell (Jigoku)

The Sinners of Hell (Jigoku) Quotes