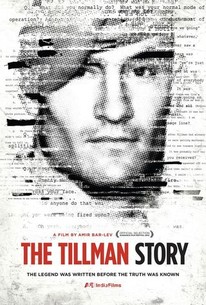 Passionate, angry, and insightful, The Tillman Story offers a revealing portrait of its subject's inspiring life and untimely death.

In 2002, as America was poised to go to war in the wake of the 9/11 terrorist attacks, Pat Tillman, a defensive back with the Arizona Cardinals, joined the United States Army, believing he had a duty to serve in a time of need even though he had signed a lucrative deal to play professional football. Tillman served a tour of duty in Iraq and was on patrol in Afghanistan when, on April 22, 2004, he was killed during a reconnaissance mission near the border of Pakistan. When word spread about Tillman's death, the Army issued a press release declaring he'd been shot down while trying to heroically block the fire of a band of Taliban insurgents. While the Army's story painted a glowing picture of the fallen soldier and athlete, some of the details sounded suspect to Tillman's family, and in time they began asking questions. As it happens, Tillman's parents were outspoken in their opposition to the war in Iraq, and after he had seen what was happening firsthand, so was Tillman, who had been a sharp student with an interest in politics during his college years. In time, Tillman's parents demanded an investigation into their son's death, and the testimony of several witnesses revealed that Tillman wasn't felled during an act of heroism -- his death was the result of "friendly fire" by men from his own company, shooting indiscriminately at an unknown target. Filmmaker Amir Bar-Lev examines Pat Tillman's unusual life and times, the facts about his death, how and why the military created a cover story to hide the truth, and his family's battle to bring the real story into the open in the documentary The Tillman Story, which received its world premiere at the 2010 Sundance Film Festival.

News & Interviews for The Tillman Story

Critic Reviews for The Tillman Story

Audience Reviews for The Tillman Story