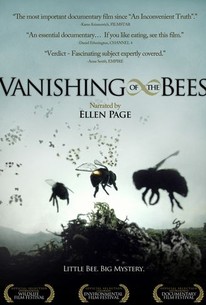 The Vanishing of the Bees Photos

"The Vanishing of the Bees" takes a piercing investigative look at the economic, political and ecological implications of the worldwide disappearance of the honeybee. The documentary examines our current agricultural landscape and celebrates the ancient and sacred connection between man and honeybee. The film also highlights the positive changes that have resulted due to a tragic phenomenon known as "Colony Collapse Disorder."

Critic Reviews for The Vanishing of the Bees

Hypnotic slo-mo images of honeybees flapping their wings are about all that distinguishes the docu Vanishing of the Bees from a well-researched article on its subject.

After watching this, you'll probably end up worrying as much as they do.

There's little form to the structure, the editing is amateurish and the narration is puerile. It's a worthwhile subject - but the film is too poor to justify a release.

Of course something has to change. But let's start with the eco-doc format.

Langworthy and Henein sketch out the way this crisis has entered Hollywood's consciousness, in the form of M Night Shyamalan's sci-fi clunker The Happening.

So, while the cold hard facts may be important enough to make this a film worth watching, the message is in danger of getting lost to all but the most hardy of audiences.

A cogent documentary exploring the causes of the global disappearance of honeybees who play such a crucial role in our ecosystem.

Both frightening and inspiring.

Shines a light on a fascinating and important subject, but also suffers some from comparatively lax filmmaking, failing to provide the sort of detail which would more robustly engage the typical layperson viewer.

Well intentioned and urgent - but let down by hammy narration, a made-for-TV budget and a blatant plug for its co-sponsor, the Co-op.

A serious, didactic, rather rambling documentary.

Audience Reviews for The Vanishing of the Bees

This documentary explores the environmental implications of a mysterious disappearance of bees. More optimistic than most environmentalist documentaries, which of have a tendency to doom-say one to death, this film contains some decent information that promotes organic farming and a reduction in our use of pesticides, calling in one of the usual suspects in this conversation, Michael Pollan. I also found it interesting how connected bees are with the eco-system. However, the narration is probably written by a four-year-old, and Ellen Page reads it like she's trying to entertain a grade school class. Overall, in an age when we find information on film more digestible than information written, The Vanishing of the Bees is worth watching, but it's not much of a film.

I didn't think it was a great documentary, but the subject was interesting.

The Vanishing of the Bees Quotes