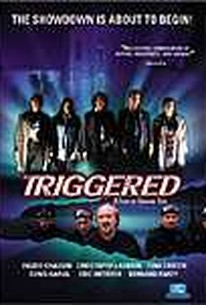 Part black comedy and part crime thriller, director Gerard Cuq's debut feature film The Wackos follows the story of four undercover narcotics officers as they take an unexpected detour into a life of crime. As they head to their assignment of infiltrating a costume party -- disguised as partygoers in Confederate army costumes -- the four aforementioned officers, along with their informant, make a quick stop at a bank so that one of their ranks might make a withdrawal. When the ATM eats his bank card, Debe (Christophe Laubion) and his companions head inside to complain, only to receive the cold shoulder from the tellers. Inexplicably, Debe impulsively exacts his revenge by robbing the bank -- and kills a number of people in the process. While fleeing the scene, the gang discovers that their informant has been shot and -- just as they start to consider what to do with him -- they come across a rural mental hospital. Their situation goes from bad to worse when their location is revealed to the authorities by the one nurse on duty and they are forced to take into captivity the patient population of the hospital -- a population in dire need of their daily medication in order to keep their illnesses in check. ~ Ryan Shriver, Rovi

Avram Birau
as Fou
View All

Critic Reviews for The Wackos

There are no critic reviews yet for The Wackos. Keep checking Rotten Tomatoes for updates!

Audience Reviews for The Wackos

There are no featured audience reviews for The Wackos at this time.