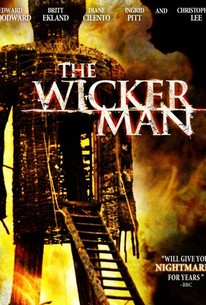 This intelligent horror film is subtle in its thrills and chills, with an ending that is both shocking and truly memorable.

A righteous police officer investigating the disappearance of a young girl comes into conflict with the unusual residents of a secluded Scottish isle in this unsettling, intelligent chiller. Brought to the island of Summerisle by an anonymous letter, Edward Woodward's constable is surprised to discover that the island's population suspiciously denies the missing girl's very existence. Even more shocking, at least to the traditionally pious law office, the island is ruled by a libertarian society organized around pagan rituals. Repelled by the open acceptance of sexuality, nature worship, and even witchcraft, the officer takes an antagonistic attitude towards the people and their leader, an eccentric but charming English lord (Christopher Lee). The officer's unease intensifies as he continues his investigation, slowly coming to fear that the girl's disappearance may be linked in a particularly horrifying manner to an upcoming public festival. Anthony Shaffer's meticulously crafted screenplay creates a thoroughly convincing alternative society, building tension through slow discovery and indirect suggestion and making the terrifying climax all the more effective. Performances are also perfectly tuned, with Woodward suitably priggish as the investigator and horror icon Lee delivering one of his most accomplished performances as Lord Summerisle. Little noticed during its original theatrical run due to studio edits and a limited release, the film's intelligence and uncanny tone has since attracted a devoted cult following. -- (C) Rovi

Irene Summers
as May Morrison

Irene Sunters
as May Morrison

Lorraine Peters
as Girl on grave

Elizabeth Sinclair
as Villager on Summerisle

Juliette Cadsow
as Villager on Summerisle

Juliet Cadzow
as Villager on Summerisle

Helen Norman
as Villager on Summerisle

Andrew Tompkins
as Musician
View All

News & Interviews for The Wicker Man

Critic Reviews for The Wicker Man

Audience Reviews for The Wicker Man