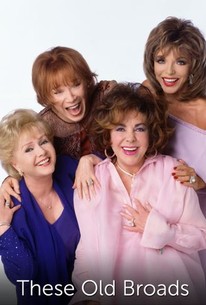 Four of Tinseltown's greatest glamour queens came together for this tartly comic made-for-TV movie which pokes gentle (and not so gentle) fun at their histories and reputations. Kate Westburn (Shirley MacLaine), Addie Holden (Joan Collins), and Piper Grayson (Debbie Reynolds) are three legendary Hollywood stars who in their heyday were known to audiences for their beauty, charm, and musical talent -- and, within the movie industry, for their short tempers and industrial-strength egos. The three stars only worked together once, on a musical made in the early '60s called Boy Crazy, but when the film becomes a cult sensation in a late-'90s re-release, Gavin (Nestor Carbonell), a network television executive desperate for a hit, gets the idea of staging a reunion special starring the three divas. However, there's a hitch -- the three women can barely stand each other, and while they share the same agent, Beryl Mason (Elizabeth Taylor), Beryl and Piper haven't gotten along since Piper's husband left her to marry Beryl. But Gavin is determined to make the project work, and hires Kate's son Wesley (Jonathan Silverman) to work with Beryl to pull things together. Against all odds, the three stars agree to do the special, but while there's no small amount of cat-fighting behind the scenes, in front of the camera the ladies discover time has not been kind to all of them. These Old Broads was written and executive-produced by Carrie Fisher and Elaine Pope; Fisher, of course, is the daughter of Debbie Reynolds, whose husband Eddie Fisher had an affair with Elizabeth Taylor (Fisher later married Taylor after he divorced Reynolds), and Fisher wrote a character based on her mother for the novel (and subsequent movie) Postcards From the Edge, which was played onscreen by Shirley MacLaine. No word on where Joan Collins fit into this formula.

Critic Reviews for These Old Broads

Audience Reviews for These Old Broads