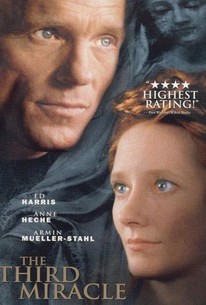 A priest finds his faith tested when he's assigned to investigate a possible case of divine intervention. Rev. Frank Shore (Ed Harris) is a Catholic priest who works as a postulator, a church official who investigates reports of holy miracles to determine their veracity. Some time back, one of Shore's investigations had ugly repercussions, and now he devotes his time to running a soup kitchen. But he's called back to service by Bishop Cahill (Charles Haid) when a number of Catholics begin calling for the canonization of the late Helen O'Regan, who is alleged to have performed miracles and whose statue is said to weep tears of blood. Shore begins digging into O'Regan's life and the miracles she is supposed to have performed; in his travels, he meets Maria (Caterina Scorsone), a teenage girl who was supposedly healed by O'Regan, and Roxane (Anne Heche), O'Regan's daughter, who was abandoned by her mother, wants nothing to do with her story, and has given up her belief in God. While investigating the miracle of O'Regan's statue, Shore witnesses the bleeding himself and tells the church that he believes the claims are legitimate. However, this view leads to angry reprisals from Archbishop Werner (Armin Mueller-Stahl); Shore's story is not given any greater credence when he become romantically involved with Roxanne. The Third Miracle was released only a few months after Stigmata, another story of Catholic priests investigating allegations of a modern-day miracle, not the sort of subject one might have expected to become a trend.

Arthur Eng
as Doctor
View All

Critic Reviews for The Third Miracle

Audience Reviews for The Third Miracle