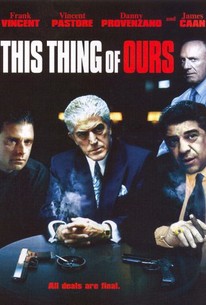 This Thing of Ours

This Thing of Ours Ratings & Reviews Explanation

Grandnephew of the famous mobster known as Tony Pro, Danny Provenzano is the co-writer, director, and star of the independent crime drama This Thing of Ours (the title is a literal translation of the crime organization La Cosa Nostra). Provenzano plays young mobster Nick Santini, who wishes to impress his Uncle Danny (Frank Vincent) and the other elders of a New Jersey mob. Nick plans a major bank heist with his old pal Robert Biaggio (Christian Maelen) and computer geek Austin Palermo (Louis Vanaria). Using a complicated Internet scam to distort a communications satellite, they plan to steal more than 50 million dollars. Nick is eventually stuck with having to choose between his friends and the mob when high-ranking Patsy DeGrazio (Michael DelGaizo) kidnaps Austin. This Thing of Ours also stars Vincent Pastore (The Sopranos), James Caan (The Godfather), and Pat Cooper (Analyze This). Incidentally, Provenzano was arresting in 1999 under a 44-count felony indictment that included charges of racketeering, kidnapping, and money laundering. He eventually pleaded guilty to racketeering and was scheduled to begin a ten-year prison sentence in August 2003, just weeks after his film is released.

James Caan
as Jimmy the Godfather

Ted A. Bohus
as Teddy Alexander

Dan Conte
as Guy Who Didn't Get Joke

Anthony Corozzo
as Soldier No. 1

Ricky Lucchese III
as Guy in Restroom with DeGrazio

Alket Adini
as Nino the Zip
View All

Critic Reviews for This Thing of Ours

Audience Reviews for This Thing of Ours

This Thing of Ours Quotes