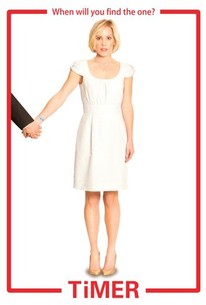 Life doesn't offer many guarantees, but in the alternate universe of writer-director Jac Schaeffer's feature debut, the romantic comedy TiMER, people can get a digital clock implanted on their wrist that counts down to the second they meet "the one." It even sounds a little alarm the first time two soul mates look into each other's eyes. The device is not working too well for Oona (Emma Caulfield, who played Anya on Buffy the Vampire Slayer), because her TiMER is blank. That means her soul mate, whoever he is, hasn't yet signed up for the service. So Oona dates guys without TiMERs, and forces them to get the implant if the relationship looks promising. But so far, no dice. Oona's twentysomething half sister, Steph (Michelle Borth), is also unlucky. Her TiMER tells her she won't meet Mr. Right for about 20 more years. While Steph sows her wild oats, resigned not to commit to a relationship, Oona, approaching 30, obsesses over her TiMER. Oona meets a cute younger guy working at the local supermarket, but Mikey (John Patrick Amedori of Gossip Girl) already has a TiMER, and it's set to go off in a few months. "Life is about detours," he tells her, but Oona's not convinced. Meanwhile, Steph meets dashing and TiMER-less Dan (Desmond Harrington, also of Gossip Girl). Dan is interested in Steph, but she knows he's not "the one" for her, so she tries to set him up with Oona. Timer also features JoBeth Williams as Oona's mom. The film had its world premiere at the 2009 Tribeca Film Festival, and was shown on demand in conjunction with the 2010 festival at the time of its theatrical release. ~ Josh Ralske, Rovi

Desmond Harrington
as Dan the Man