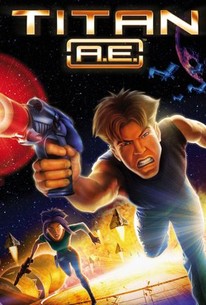 Great visuals, but the story feels like a cut-and-paste job of other sci-fi movies.

Titan A.E. combines cel and CG imagery in this science fiction saga. In 3028, after the Earth is destroyed by an invading alien race, a tiny number of surviving humans roam the universe in ragtag spaceships, trying to find each other and maintain some sense of community. Shortly before the final destruction of the planet, Cale (voice of Matt Damon) was given a map that would guide him to a space station called Titan, secretly constructed as a last hope in the event of alien Armageddon. Cale sets out in search of Titan and the fabled Ice Planet with the help of his friend Korso (voice of Bill Pullman), the beautiful Akima (voice of Drew Barrymore), and a crew of friendly aliens. Titan A.E. was directed by noted animators Don Bluth and Gary Goldman and scripted by Ben Edlund, creator of the comic book series The Tick. Other members of the voice cast include Nathan Lane, Janeane Garofalo, John Leguizamo, and Tone Loc. ~ Mark Deming, Rovi

Jim Breuer
as The Cook

David L. Lander
as The Mayor

Thomas A. Chantler
as Male Announcer

Elaine A. Clark
as Citizen