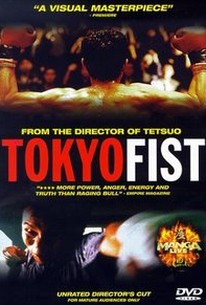 Tsuda (played by Shinya Tsukamoto) is a frustrated insurance salesman who lives a life of quiet desperation with his girlfriend Hizuru (Kaori Fujii). His job yields little fulfillment, his relationship lacks passion, and he feels perpetually fatigued, as if overwhelmed by the inhuman scale of Tokyo. His life takes a bizarre turn when his old high school acquaintance Kojima (Kohji Tsukamoto) pays him a visit. The wild-eyed professional boxer attempts to seduce Hizuru, driving Tsuda into a jealous fury. When he confronts Kojima, he ends up in the hospital and Hizuru ends up with the boxer. Seeking revenge, Tsuda begins boxing training with insane intensity. Watching his former high school chum thrash his sparring partners gives Kojima a rise of some form, bolstering his sagging career in the ring. Meanwhile, Hizuru begins her own brand of self-discovery though self-mutilation, from relatively mild tattoos and nose rings to driving metal stakes into her flesh, until she looks like a vengeful goddess from Japanese mythology. What develops has to be one of the most bizarre, masochistic love triangles ever committed to celluloid. Kojima relishes ripping the rings from Hizuru's flesh; Hizuru tenderly beats Tsuda into a bloody pulp; and Tsuda bashes his own head against the wall. ~ Jonathan Crow, Rovi

Naomasa Musaka
as Hase the trainer

Naoto Takenaka
as Ohizumi the trainer