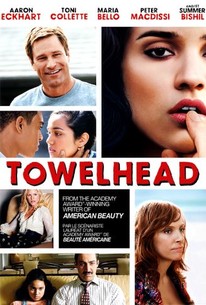 This story of politics, race and, sexual awakening has moments that pack a punch, but overall, Towelhead never quite achieves the nuance of helmer Alan Ball's television work.

Six Feet Under creator and American Beauty screenwriter Alan Ball makes his feature directorial debut with this screen adaptation of author Alicia Erian's controversial novel Towelhead. Jasira (Summer Bishil) is a 13-year-old Arab-American who's contending with the pains of adolescence when her life takes a sudden and unexpected turn. Sent to live with her stern Lebanese father, Rifat (Peter Macdissi), by her self-absorbed mother (Maria Bello), Jasira finds herself struggling to adjust to life in the suburbs while contending with racism and hypocrisy at every turn. Rifat lives in a modest, suburban Houston home next to racist reservist Mr. Vuoso (Aaron Eckhart) and meddling expectant mother Melina (Toni Collette). Adjusting to life in the suburbs isn't easy for young Jasira, though she tries her hardest to adapt to the unfamiliar environment by striking up casual conversations with her curious new neighbors. In the process, Jasira finds herself increasingly attracted to hormone-driven African-American teen Thomas (Eugene Jones). When Rifat finds out that his daughter's new boyfriend is black, he vehemently condemns the relationship. As America launches its initial invasion of Iraq, Jasira finds herself caught up in a potentially explosive situation that is only compounded by her raging hormones and the snooping of her pregnant, busybody neighbor. ~ Jason Buchanan, Rovi

Lynn Collins
as Thena
View All

RT on DVD: A Matthew McConaughey Stinker or Event Horizon on Blu-ray?
Toronto Film Fest: Margot at the Wedding, Nothing is Private Reviews
RTIndie: TIFF Acquisitions Include Controversial, Political Films
View All