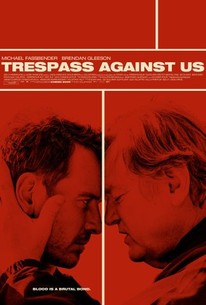 Trespass Against Us benefits from Michael Fassbender and Brendan Gleeson's typically strong performances, even when they aren't quite enough to balance the story's narrative drift and awkward tonal shifts.

Trespass Against Us Ratings & Reviews Explanation

Trespass Against Us Videos

Trespass Against Us Photos

TRESPASS AGAINST US is set across three generations of the Cutler family who live as outlaws in their own anarchic corner of Britain's richest countryside. Chad Cutler (Michael Fassbender) is heir apparent to his bruising criminal father, Colby (Brendan Gleeson) and has been groomed to spend his life hunting, thieving and tormenting the police. But with his own son, Tyson (Georgie Smith) coming of age, Chad soon finds himself locked in a battle with his father for the future of his young family. When Colby learns of Chad's dreams for another life he sets out to tie his son and grandson into the archaic order that has bound the Cutler family for generations. He engineers a spectacular piece of criminal business involving a heist, a high-speed car chase and a manhunt, which leaves Chad bruised and bloodied and with his very freedom at stake. With the law cracking down and his father tightening his grip, Chad is forced into increasingly desperate measures. Featuring incredible performances - and an astonishing score by The Chemical Brothers - TRESPASS AGAINST US is at once an exhilarating crime thriller and a profoundly moving story about love and family.

Billy Cook
as Pockets
View All

News & Interviews for Trespass Against Us

Critic Reviews for Trespass Against Us

Audience Reviews for Trespass Against Us

Trespass Against Us Quotes