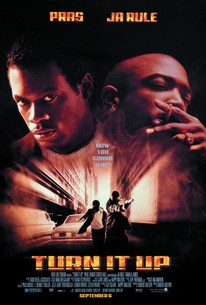 Reviewers say Turn It Up has a derivative feel, running through too many urban movie cliches.

Turn It Up Ratings & Reviews Explanation

Turn It Up Photos

Prakazrel Michel, better known as Pras from the top-selling R&B group The Fugees, stars in this urban drama based on both his solo album Ghetto Superstar and his novel of the same name. Diamond (Pras) is an up-and-coming musician who is trying to use his creative gifts to work his way out of the ghetto after the traumatic death of his mother. But he soon discovers that the music industry is nearly as corrupt and dangerous as the streets he's trying to leave behind, and Diamond is guided into a life of crime by his shady friend Gage (Ja Rule). In addition, Diamond must content with the unexpected pregnancy of his girlfriend Tamara (Tamala Jones), and attempts by his father Cliff (Vondie Curtis-Hall) to mend their contentious relationship. Turn It Up, which was produced under the title Ghetto Superstar, also features Eugene Clark and Patricia Velasquez. Madonna helped to produce the film through her production company, Madguy Films.

Jason Statham
as Mr. B

Critic Reviews for Turn It Up

Audience Reviews for Turn It Up

There are no featured audience reviews for Turn It Up at this time.

Turn It Up Quotes