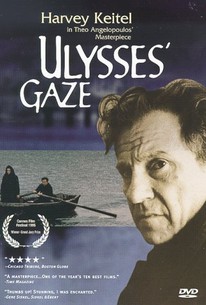 Winner of the Grand Prize at the Cannes Film Festival, this drama centers on the Balkan conflict as viewed through the eyes of a filmmaker named A (Harvey Keitel). Director Theo Angelopoulos wrote the screenplay, drawing from personal experiences. A is a Greek émigré director who returns to his homeland after 35 years in the U.S., ostensibly to screen his latest film, which is so controversial that it attracts religious protests. In fact, A's real purpose is to search for three reels of undeveloped film that may be the first ever shot by pioneer Balkan filmmakers the Manakis brothers, who documented simple circa-1900 peasant life. A's Homeric journey includes flashbacks into past historical events. He travels by taxi to Albania, where he enlists the help of a film archivist (Maia Morgenstern, who plays all four female roles). She joins him on a train ride to Bucharest, Romania. An extensive flashback chronicles A's childhood under Communism in Bucharest. His next stop is Belgrade, the capital of Serbia, where he is directed to Sarajevo. Angelopoulos mixes scenes shot during the actual Balkan war with historic re-enactments and dreamscapes to examine the role of the artist in political upheaval. ~ Michael Betzold, Rovi

Harvey Keitel
as A

There are no featured audience reviews for Ulysses' Gaze at this time.