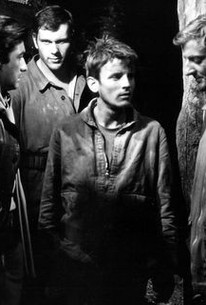 In this WW II drama, twelve captured French soldiers await their impending executions in a German prison camp. Fortunately, a wily resistance fighter and his men come to rescue the ill-fated dozen. The rescue attempt succeeds, but the rebels become worried when they discover a thirteenth prisoner who has come with the others. This fellow carries no ID, and now the fighters must decide whether he should die on the spot or continue on with the others. One of the group members votes for immediate execution. Later the stranger accompanies the group on a raid and ends up nearly sacrificing his life to save a child from being shot. The rebel leader is not impressed and orders that one of the men kill the stranger down by the river. The dutiful soldier listens to the stranger who tells him the truth: he is a deserter and a fervent pacifist. The soldier allows the deserter to escape. That night the stranger returns and tries to warn the rebels of a Nazi ambush. The group leader heads off to warn the others, but he is too late and they are all recaptured. Later all but the pacifist are hanged.

Michel Piccoli
as The Extra Man
View All

There are no critic reviews yet for Un Homme De Trop. Keep checking Rotten Tomatoes for updates!

There are no featured audience reviews for Un Homme De Trop at this time.