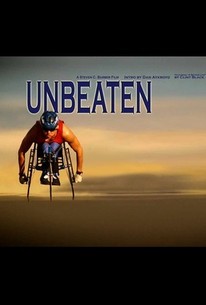 "Unbeaten," the second film from award-winning documentary filmmaker Steven C. Barber, is an inspirational story that chronicles the exploits of 31 paraplegics for six days, as they make their way in wheelchairs and hand cycles in what is known as the toughest road race in the world, "Sadler's Alaska Challenge." The course winds 267 miles though the mountain passes of Denali National Park between Fairbanks and Anchorage.The film takes us into the 55 mile-per-day grind of three wheelchair racers, Chris Kohler, Geoffrey Erickson and Edwin Figueroa. The story transitions midway through as the filmmaker follows the elite racers of the U.S. Paralympics squad, Oz Sanchez (current Paralympic gold medalist and fastest man in the world in a hand cycle) and Alejandro Albor (Paralympic silver medalist) in their quest to medal at the 2008 Beijing Paralympics.For many of the participants, it is a journey of self-discovery, of strength and a demonstration of will and determination. It is also a message to countless individuals with physical limitations worldwide. "Unbeaten" is a monumental homage to heroism and a message of hope to countless disabled individuals worldwide.Vanilla Fire Productions has teamed up with Polaris Media Group, an international entrepreneurial skills training company, to raise the profile of disabled athletes and disabled persons worldwide. Shane Krider, CEO and founder of Polaris, served as Executive Producer for "Unbeaten" and Greg Strom, Head of Worldwide Media for Polaris, was a Producer for the film.The three-year odyssey to finish the film came with the generosity of some high profile individuals, including Steve Forbes, Eli Broad, Boone Pickens, Cher, Billy Jean King, Tony Hawk, Clint Black, Paula and Sumner Redstone, Larry Hagman, Clint Black, Pamela Anderson and Steve Jobs. Partial proceeds from this film will be contributed to the Challenged Athletes Foundation. --© Official Site

There are no featured audience reviews for Unbeaten at this time.