Sous les Bombes (Under the Bombs) 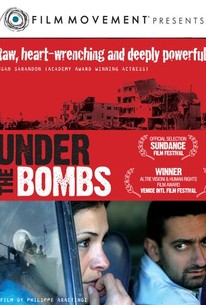 Sous les Bombes (Under the Bombs)

A divorced Shiite mother and a kindly Christian taxi driver venture into war-torn Lebanon on a desperate quest to locate the woman's missing six-year-old son. Zeina (Nada Abou Farhat) is an upper-class mother who was going through a divorce when she sent her son Karim to live with his aunt in the small village of Kherbet Selem, just south of Lebanon. Having sent Karim away to spare him the pain of watching his parents separate, Zeina is horrified to discover that war has broken out in Lebanon and now her child is nowhere to be found. Zeina knows that the only way to reach Lebanon is through Turkey, but her desperate trip to the port of Beirut is unexpectedly hindered by the blockade. On the day of the ceasefire, Zelna finally arrives at the port of Beirut. Though the vast majority of local taxi drivers prove reluctant make the dangerous journey south, amiable cabbie Tony sympathizes with the desperate mother and bravely agrees to act as her escort. Upon arriving in Kherbet Selem, Zeina is informed by a young boy that her sister was killed and French journalists have taken Karim away. Now, as every hour of Zeina's search becomes a monumental struggle, the Shiite mother and the Christian cab driver discover just how futile religious differences truly are when a child's life is on the line.

Bshara Atallah
as The Journalist

Critic Reviews for Sous les Bombes (Under the Bombs)

Audience Reviews for Sous les Bombes (Under the Bombs)