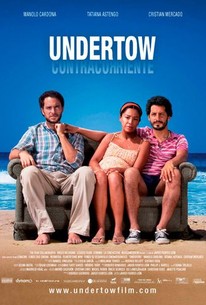 A drama as beautifully filmed as it is finely detailed, Undertow is a wonderfully unique love story with a touch of magic.

A man struggles to come to terms with the unexpected consequences of a secret love in this drama from director Javier Fuentes-Len. Miguel (Cristian Mercado) supports himself and his family as a fisherman in a small town on the coast of Peru. Miguel is happily married to Mariela (Tatiana Astengo), who is pregnant with their first child, and the couple are well respected in their community and active in the local church. But there's a side of Miguel that he keeps hidden from most people -- Miguel is also in love with Santiago (Manolo Cardona), an artist who is spending time in the village, and the two have secretly been having an affair. Santiago drowns one evening while swimming, and his ghost visits Miguel, telling him that his spirit will not know peace until Miguel finds the courage to tell the community about their love. While some suspect Miguel is hiding something when nude paintings of him are found in Santiago's home, Miguel isn't sure where to find the courage to confess his bisexuality to his wife and neighbors. Undertow (aka Contracorriente) was an official selection in World Cinema program the 2010 Sundance Film Festival, where it received the Audience Award for Best World Dramatic Feature. ~ Mark Deming, Rovi