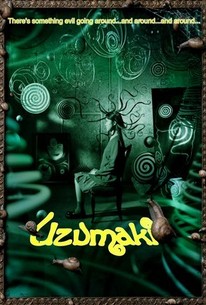 Uzumaki uses its creepy, David Lynch-inspired atmospherics to effectively build a sense of dread, but ultimately fails to do anything with it.

Based on the phenomenally popular horror manga by Junji Ito, Uzumaki is the debut feature of Japanese music video director Higuchinsky (born Akirhiro Higuchi). Something strange is going on in the small town of Kurozu-cho. Kirie Goshima (Ericko Hatsune) notices Toshio Saito (popular character actor Ren Osugi), the father of her longtime friend, Shuichi (Fhi Fan), videotaping an extreme close-up of the spiral pattern on a snail's shell. Shuichi explains that his father is acting strangely, and impulsively asks Kirie to elope with him. She shyly demurs. Later, Toshio asks Kirie's father, a potter, to make him a plate with an uzumaki, or spiral, pattern. Shuichi and his mother, Yukie (Keiko Takahashi), are increasingly alarmed by Toshio's obsession with all things spiral. When Shuichi throws away his father's collection of spiral objects, Toshio is unconcerned. "The idea's enough," he tells his family, "One brings forth one's own uzumaki." He then proceeds to do just that, in bizarre and disturbing ways. At school, Kirie sees a boy gleefully hurl himself to his death at the bottom of a spiral staircase. Another boy shows up to class late, moving suspiciously slowly, and covered in slime. A popular girl, Kyoko (Hinako Saeki), curls her hair into Medusa-like spiral patterns that eventually engulf the entire hallway. As the town slips deeper into madness, a reporter, Ichiro Tamura (Masami Horiuchi), shows up to help Kirie and Shuichi search for the reason, which seems connected to a strange occurrence years ago at nearby Dragonfly Pond. Uzumaki is not to be confused with Joji Iida's Rasen, the sequel to Ringu, which also featured Saeki. ~ Josh Ralske, Rovi