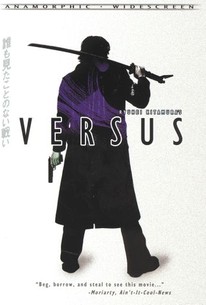 Evil Dead 2 meets Street Fighter by way of The Matrix in this wild and woolly zombie/yakuza/samurai/kung fu/splatter flick directed by Ryuhei Kitamura. Throughout the world there are 666 portals to the other side; the 444th is Japan and is called the Forest of Resurrection, where good has battled evil for time immemorial. The film opens with prisoner KSC2-303 (Tak Sakaguchi) and his fellow cellmate escaping a maximum-security prison and ending up in the forest where they are supposedly to be picked up by a band of gangsters in a shiny Mercedes and taken to a safer place. Instead, the gangsters try to use them and a female hostage (Chieko Misaka) as pawns in a larger power struggle. A gunfight ensues killing KSC2-303's colleague and the mob boss, but just as the standoff is about to yield more violence, an odd thing happens -- the dead get up and attack the living. In the chaos, KSC2-303 and girl disappear into the forest with a band of slickly coifed yakuza in hot pursuit. High-kicks, machine guns, and rampant disembowelments ensue. This film was screened at the 2001 Toronto Film Festival.

Chieko Misaka
as The Girl

Hideo Sakaki
as The Man

Kazuhito Ohba
as Yakuza with Glasses

Yukihito Tanikado
as Cop with Barrett

Motonari Komiya
as Other Prisoner
View All

Critic Reviews for Versus

Audience Reviews for Versus