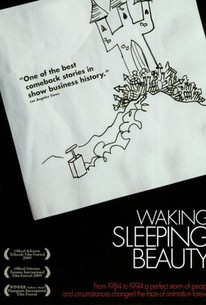 It doesn't probe as deep -- or tell as many hard truths -- as it could have, but Don Hahn's look at Disney's rebirth offers a fascinating and surprisingly candorous glimpse into the studio's past.

Walt Disney Pictures has been the leading name in animated filmmaking since the 1930s, but the studio's crown was looking more than a little tarnished in the 1980s after a series of expensive commercial and critical disappointments such as The Fox and the Hound, The Black Cauldron, and The Great Mouse Detective. At that time, a handful of Disney executives were questioning the wisdom of continuing to make animated films, as the company was making more money in live-action movies, theme parks, and television. That changed when Roy Disney -- Walt's nephew and the last figure from the studio's Golden Age management team still on board -- teamed up with newly hired studio executives Michael D. Eisner and Jeffrey Katzenberg to restore their reputation for both quality and commercial appeal. With the success of Who Framed Roger Rabbit in 1988, the team sparked a new interest in animation on the big screen, and a string of smash hits that began with The Little Mermaid and Beauty and the Beast launched a new era of both acclaim and box-office success for the company. But those successes didn't come without behind-the-scenes conflict, and Don Hahn, a longtime producer at Disney, offers an inside look at the creative squabbles and battles amongst the management that came during Disney's climb back to the top of Hollywood's mountain in the documentary Waking Sleeping Beauty. Along with behind-the-scenes footage and rare personal artwork created by the studio's animation staff (including some unflattering cartoons of their bosses), the film includes interviews with many key figures of this era in Disney history, and several people who enjoyed greater success after leaving the company, such as Tim Burton and John Lasseter. Waking Sleeping Beauty was an official selection at the 2009 Toronto International Film Festival. ~ Mark Deming, Rovi

Pete’s Dragon, The Handmaiden, Iron Fist and More on Netflix and Amazon Prime This Week
Critics Consensus: How to Train Your Dragon Is Certified Fresh
View All