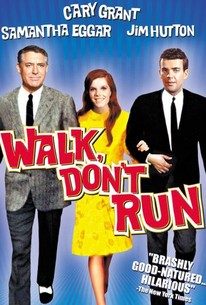 Cary Grant made his last film appearance before retiring from the screen in this agreeable piece of fluff based on the 1943 comedy The More the Merrier, which dealt with the romantic complications inherent in the housing shortage in Washington D.C. during World War II. In Walk, Don't Run, the story is updated to a housing shortage in Tokyo during the Olympic Games of 1964. British industrialist Sir William Rutland (Cary Grant) arrives in Tokyo two days before the start of the games and cannot find any suitable accommodations. As a result, he answers an ad for an "apartment to share" and convinces the occupant, Christine Easton (Samantha Eggar), to rent a room to him. The next day he meets the handsome Steve Davis (Jim Hutton), a member of the United States Olympic walking team. Steve also needs a room and convinces Christine to take him on as a second tenant. After meeting Christine's pompous fiancé, Julius D. Haversack (John Standing), Rutland begins to ply his matchmaking skills in an effort to get Christine and Steve to fall in love with each other.

A. Ben Astar
as Dimitri