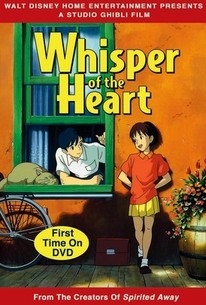 Whisper of the Heart (Mimi wo sumaseba) (If You Listen Closely)

Written by animation master Hayao Miyazaki and directed by his protégé Yoshifumi Kondo, this film is a simple tale about a young girl who falls in love and learns to believe in herself. Suzuku Tsukishima is nearing the end of her final year of junior high. An avid bookworm, she devours books while quietly dreaming about becoming a writer. Though vivacious and outgoing with her best friend, she withdraws into herself when in the presence of her bossy older sister; her studious father, who is busy researching local history; and her mother, who is absorbed in the college courses she's taking. Then one day, she meets Seiji, a lad who has the ability to both irritate and charm her, often at the same time. He also harbors an unusual ambition: to build violins in Cremona, Italy. Around the same time, she meets a kindly old man who owns an antique shop, whom she later learns is Seiji's grandfather. One item in the store particularly catches her eye -- a strange statue of a cat with glittering eyes. Inspired by Seiji's utter determination to realize his own dream, she writes a story about the feline-shaped sculpture coming to life. ~ Jonathan Crow, Rovi