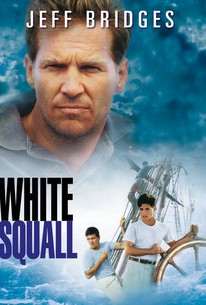 Based on a true incident from 1960, White Squall is the story of the tragic sinking of the Albatross, a prep school educational two-masted schooner, during a Caribbean storm. Screenwriter Todd Robinson wrote the script after meeting one of the tragedy's survivors, Chuck Gieg. In the film, Gieg (Scott Wolf) is the narrator. He and his fellow students, whose parents have paid handsomely for their schooling, which combines classroom work with real-life adventure, are introduced to their grizzled seafaring captain, Christopher Sheldon (Jeff Bridges). Gieg is initially skeptical of Sheldon's authority, but he gradually comes to see the captain as a model of manhood. The other boys aboard include Frank Beaumont (Jeremy Sisto), a self-absorbed snob; Dean Preston (Eric Michael Cole), a troublemaker and bully; Tod Johnston (Balthazar Getty), a returning student; and the naïve Tracy Lapchick (Ethan Embry). John Savage plays the pompous English teacher aboard the ship. Various incidents establish the boys' insecurities and relationships with the authorities -- and foreshadow their eventual fate. The killer squall comes up quietly but soon turns deadly, and the boys are forced to go beyond their privileged upbringings and deal with real danger. ~ Michael Betzold, Rovi