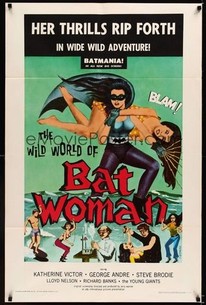 Batwoman (Katherine Victor) is a costumed crime fighter who leads a gang of beautiful Batgirls in a neverending crusade to "fight against evil with all sincerity." Her arch-enemy, Rat Fink (Richard Banks), sends henchmen to drug one of the Batgirls at a nightclub and hold her for ransom. Rat Fink wants revenge against Batwoman for foiling so many of his criminal schemes, so he threatens to dispose of the kidnapped girl if the heroine doesn't help him steal a very valuable new invention. The Ayjax Development Corporation has created an atomic hearing aid that hasn't been awarded a patent yet in the United States because it can be used for eavesdropping on telephone conversations, and it's downright explosive if exposed to cobalt. Rat Fink wants it for these very reasons, but Batwoman outwits his henchmen and escapes with the Batgirl. Understanding the danger that the world would be in if the device fell into the wrong hands, the Batgirls are sent to Ayjax to guard the prototype. Rat Fink's men hoodwink the ladies by serving them soup laced with experimental "happy pills," causing fits of go-go dancing, and soon the forces of evil have the atomic hearing aid in their clutches. Batwoman must save the day, and holds a seance to consult the spirits of the dead for help. Can Rat Fink be stopped or will the Batgirls be distracted by a wild rock & roll beach party? After D.C. Comics sued director/producer Jerry Warren for copyright infringement, a brief prologue featuring three yogurt-drinking vampire girls was added to this campy genre spoof and the title was changed to She Was a Hippy Vampire.