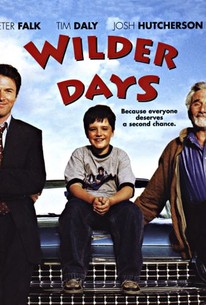 The third TV movie produced for the TNT network's "Johnson & Johnson Spotlight Presentations," Wilder Days stars Peter Falk as septuagenarian James "Pop-Up" Morse, who, though warm and indulgent toward his 11-year-old grandson Chris (Josh Hutcherson), has always been a bit aloof and distant when it comes to his own son (and Chris' father) John (Timothy Daly). As a result, John has become a bitter, uptight, super-pragmatic adult, rigidly rejecting the colorful tall tales that Pop-Up enjoys spinning for Chris. Not wishing to have Chris' imagination stunted by John, and also hoping to make up for neglecting his son, Pop-Up decides to prove that his fanciful stories are factual, beginning with his oft-told yarn of the wreck of the circus boat Wilder Days. To this end, the elder Morse "escapes" from his nursing home and takes Chris on a journey of rediscovery across country in his classic 1959 El Dorado -- without the fuming John's permission. Directed by David Mickey Evans of Radio Flyer and The Sandlot fame, Wilder Days premiered October 19, 2003.

Jacqueline Samuda
as Pearl
View All

There are no featured audience reviews for Wilder Days at this time.