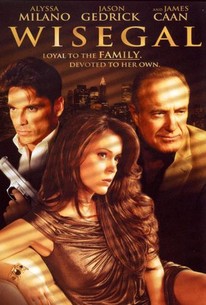 The undercover agent whose compelling life story inspired the film Donnie Brasco serves as executive producer of this fact-based crime drama starring Alyssa Milano, James Caan, and Jason Gedrick. Patty Montanari (Milano) is a widowed mother of three who turned to selling contraband cigarettes as a means of supporting her three sons. Her ties to the local mafia quickly strengthening due to her criminal endeavor, Patty eventually strikes up a relationship with local mobster Frank Russo (Gedrick). Russo is impressed by Patty's remarkable business savvy, and quickly hires her to manage one of his nearby nightclubs. It isn't long before Patty is rising through the ranks, ultimately becoming a trusted money-courier for the local crime syndicate. But while Patty may be making a mint by working for the mob, she's beginning to fear that her sons will wind up following her down the same dangerous path. Her reservations regarding her lucrative yet shady career growing with each passing day, Patty begins to wonder if there's any hope for severing her ties to one of New York's five biggest crime families without losing her life in the process.

There are no critic reviews yet for Wisegal. Keep checking Rotten Tomatoes for updates!