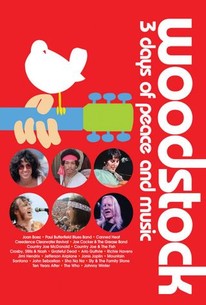 By documenting arguably the most renowned music festival in history, Woodstock: 3 Days of Peace & Music achieves the rare feat of capturing the unique spirit of its time.

This iconic musical documentary covers the three-day 1969 music festival on the property of Max Yasger's farm that symbolized the late 1960s in terms of musical, social and political ideology of the era. American audiences are introduced to Ten Years After, featuring guitar great Alvin Lee. Jimi Hendix, The Who and Joe Cocker give riveting performances. As naked flower children romp, the New York freeway is closed because of traffic congestion. Music lovers leave their cars and travel on foot only survive torrential downpours of rain, food shortages and non-stop music. Jefferson Airplane gives the wake up call with their song "Volunteers Of America." Crosby, Stills and Nash deliver a memorable performance. John Sebastian gives an impromptu set with a borrowed guitar from Tim Hardin. Santana, Sly and The Family Stone, Sha-Na-Na, Arlo Guthrie, Richie Havens and Joan Baez also appear. The movie did big box office business and a successful three record set sold millions of copies. The Grateful Dead, Credence Clearwater Revival and Janis Joplin performed but were not shown in the film. The Dead's Jerry Garcia recalled that it was the worst live show the band ever did, ironic for a band known for their spirited live performances. ~ Dan Pavlides, Rovi

Country Joe and the Fish

Sly & the Family Stone
View All