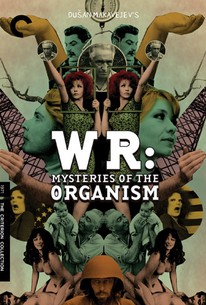 "W.R." is pioneering sexologist Wilhelm Reich, whose precedent-breaking theories concerning carnal behavior and politics (including the invention of the orgone box) made him persona non grata in most psychoanalytic circles. By all accounts, Reich began his career brilliantly - as the next great successor to Freud and Jung; he then delved into extraordinarily controversial work that divided his critics, leading some to conclude that Reich had experienced a psychotic break from reality. Dusan Makavejev is the equally controversial Yugoslavian director fascinated by Reich's theories. This essay film by Makavejev - his first major work - constitutes a witty, free-form riff on the director's perception of Reichian philosophies as the basis of individual and collective sexual liberation. Makavejev elucidates the Reichian mindset via interviews with the doctor's relatives and colleagues (we even hear from Reich's barber!) Also illustrated is the ongoing conflict between the free-thinking disciples of W.R.'s sociopolitical attitudes and the adherents of sterile Stalinism. Over the course of the picture, Makavejev journeys to the U.S. and interviews such American sexual liberationists as Screw magazine editor Al Goldstein and Betty Dodson. Woven into the factual proceedings is a fictional plotline concerning the romance between Reich adherent Milena and uptight Soviet athlete Vladimir Ilyich. Though the film was never released in Makavejev's native Yugoslavia, WR: Mysteries of the Organism firmly established the iconoclastic filmmaker's international reputation. ~ Hal Erickson, Rovi

Wilhelm Reich
as Himself
View All

There are no featured audience reviews for W. R.: Mysteries of the Organism (W.R. - Misterije organizma) at this time.