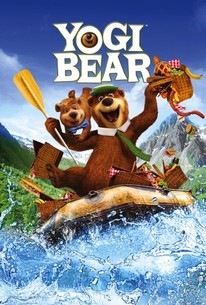 Everyone's favorite pic-a-nic basket-stealing bear comes to the big screen in "Yogi Bear," a new adventure, filmed in 3D, that combines live action with computer animation. Dan Aykroyd stars as the voice of Yogi, Jellystone Park's notorious troublemaker, and Justin Timberlake as the voice of Boo Boo, Yogi's faithful pal and co-conspirator in his never-ending schemes to separate park visitors from their lunches. Yogi has always relied on his quick wit and fast feet to stay one step ahead of irate campers while dodging his long-suffering nemesis, Ranger Smith. But he and Boo Boo are about to face a situation worse than anything Yogi has ever gotten them into... Jellystone Park is being sold! To cover his mismanagement of city funds and fuel his election campaign, Mayor Brown plans to sell the park to loggers. Families will no longer be able to experience the natural beauty of the outdoors Jellystone has always provided--and, even worse, Yogi, Boo Boo, and all their friends will be tossed out of the only home they've ever known. Faced with his biggest challenge ever, Yogi must prove he really is "smarter than the average bear," as he and Boo Boo join forces with Ranger Smith to find a way to save the park from closing forever. -- (C) Warner Bros

Nathan Corddry
as Chief of Staff

Will Wallace
as Security Guard

William A. Wallace
as Security Guard